Experience the pleasures of an uninhabited island with aquamarine waters, rugged hiking trails with celestial views, a pirate’s cave, and underwater treasures…

Caja de Muertos, one of the islands of Puerto Rico just 4.8 miles off the central southern coast of the island and a 1.5-hour drive from the capital city of San Juan.  Caja de Muertos is one of Puerto Rico’s Nature Reserves, a municipality of Ponce.  The island is a wonderful destination for beach and nature lovers seeking to experience the pleasures of an uninhabited island free of development.   The island was voted as one of the “The Ten Enchanting Natural Attractions of Puerto Rico”, (Los Diez Encantos Naturales de Puerto Rico).  Caja de Muerto is 1.5 long and 1.2 miles wide, 412. 22  acres of dry arid land. The reserve also includes the cays of Cayo Morrillito and Cayo Berberia.

Caja de Muertos was designated a nature reserve in 1980, managed by DNRA (Department of Natural Resources). Caja de Muertos is a haven for endangered turtles, birds, and sea life.  The reserve possesses fauna and flora only found here.  The high season is in the summer months, weekends, and holidays with a local crowd. During the regular “high season” for tourists from Dec. – April, you may be enjoying the island without crowds.

For visitors staying in San Juan, Ponce and the rest of the south coast, Caja de Muertos is the perfect day trip sure to be one of the highlights of your visit to Puerto Rico.  On this island you won’t find any restaurants or stores, nature is king at Caja de Muertos.  Nature lovers will enjoy activities such as birding, snorkeling, hiking and relaxation on a secluded nature reserve.

Since Caja de Muertos is on the south coast of the Caribbean Sea, it boasts some of the prettiest turquoise water in Puerto Rico and the salinity of the water is just perfect on the skin. 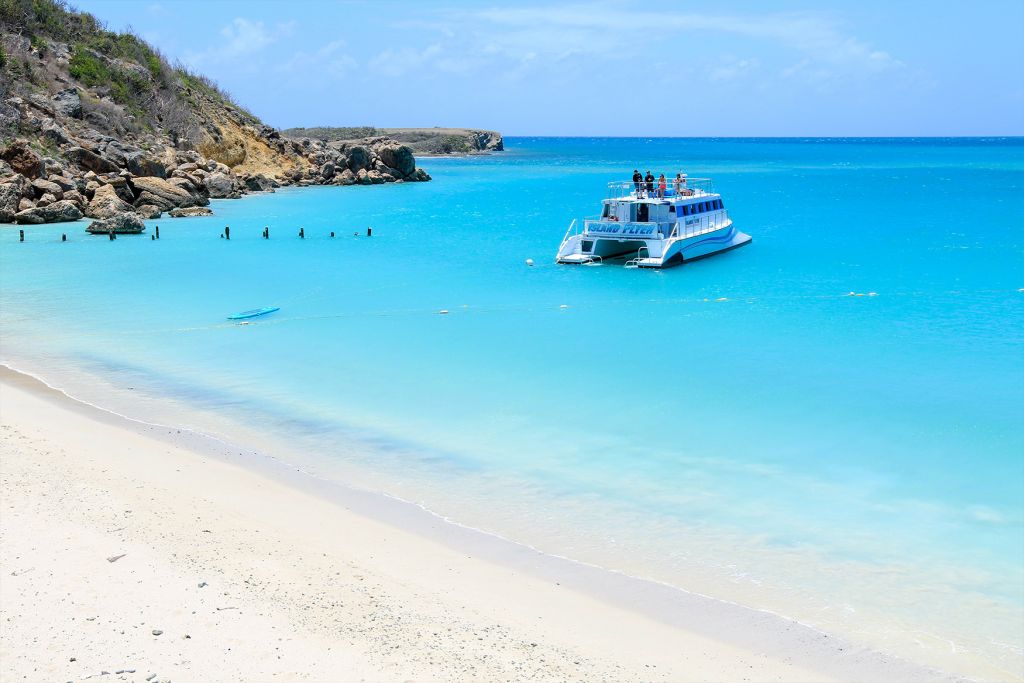 Since time is limited on the island for most visitors, they tend to stay on Pelicano Beach, but once you arrive you’ll want to stay for its beauty.  Playa Pelicano in Caja de Muertos was awarded the first Blue Flag Award located at a Nature Reserve in the Caribbean.  A beautiful beach with clear calm waters perfect for swimming.  Playa Pelicano is the most popular and accessible beach on the island and located on the west side between the dock and Cerro Morillo.

If you had more time you’ll have more beaches to explore with their own uniqueness and beauty.  For those arriving at Caja de Muertos by catamaran, we advise you to stay at Pelicano so you can make the most of your time on the island. Just come back another time and explore the rest. 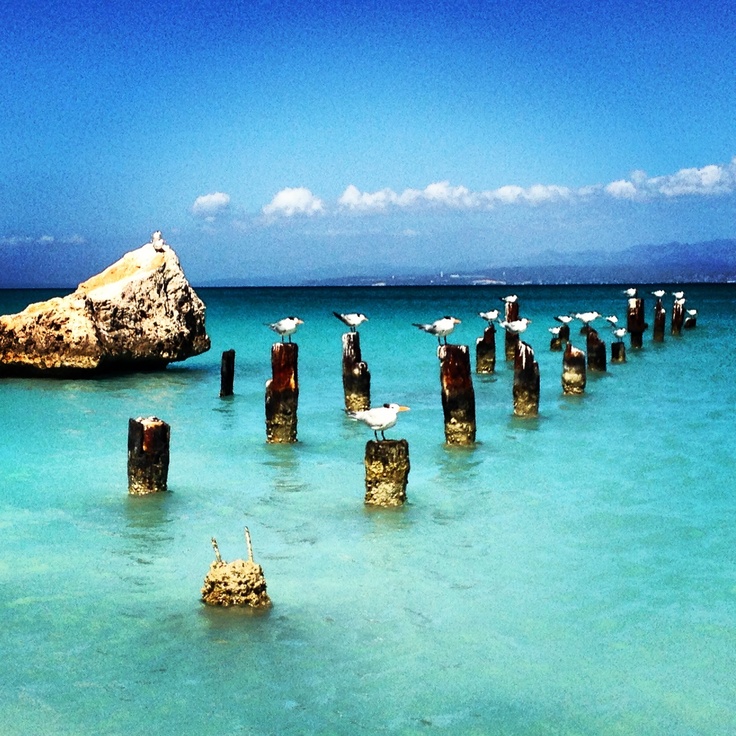 There are 25 educational stations along the trail indicating the species that abound in the area as well as other endangered species. There you’ll find a map with a route to follow on the submarine trail.  Various scuba diving charters can take you to explore the world beneath.

Caja de Muertos Island offers an educational hiking trail with very rewarding views when you reach the top as well as ruins from a lighthouse.

Nestled on the highest point of the island you can visit a historic 1887 lighthouse.  Two trails lead to the lighthouse which sadly is in very poor condition. You are not allowed to enter for your safety, however, you may walk around the perimeter of the lighthouse to admire it’s unique architecture.  The real reward are the majestic views from the observation tower on the south side of the lighthouse.

Caja de Muertos is a protected bird nesting site.  Playa Pelicano was named after the pelicans that hang out by the beach on the boulders and the stilts that remain from an old pier. 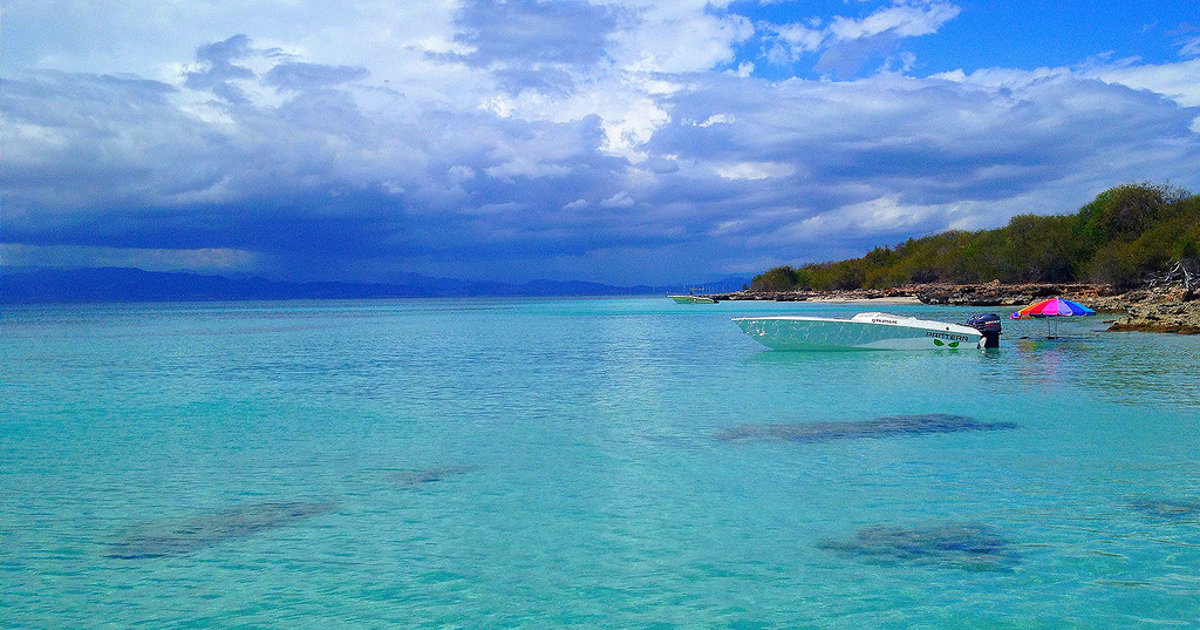 Birds you’ll be able to observe:


Island Venture takes you to the island of Caja de Muertos aboard a 65’ power catamaran the “Island Flyer”. To enjoy a Nature Reserve called Playa Pelicano. During your trip, you will be able to enjoy a sumptuous deli-style lunch buffet and refreshments aboard the catamaran.

Caja de Muertos is a perfect day escape with a loved one, a family beach day or invite your coworkers for a change of scenery and enjoy the adventure of this unique island and Natural Reserve! Caja de Muertos (English: Coffin Island or Dead Man’s Chest) is an uninhabited island off the south coast of Puerto Rico, in the municipality of Ponce. 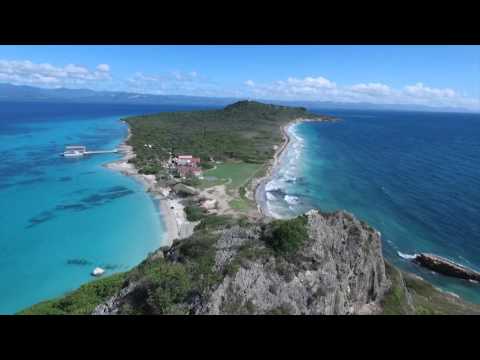 The island is protected by the Reserva Natural Caja de Muertos Natural Reserve, due to its native turtle traffic. Climbers and beachgoers are often seen on the island, which can be reached by ferry from the La Guancha Boardwalk sector of Ponce Playa. Together with Cardona, Ratones, Morrillito, Isla del Frio, Gatas and Isla de Jueyes, Caja de Muertos is one of the seven islands attributed to the municipality of Ponce. [1] [2]

The island measures 2.75 kilometers northeast or southwest, and up to 860 meters wide (560 meters on average). It has an area of ​​1.54 km². Nearby are Morrillito Key (180 m from the point southwest, 0.04 km?) and Berberia Key (6.2 km northeast, 0.30 km?), both part of the Caja de Muertos natural reserve. The Berberia key belongs to the Rio Canas Abajo Barrio of the Juan Diaz municipality. The climate is dry and the island supports a dry forest. A still functioning lighthouse, the Caja de Muertos light, established in 1887 and automated in 1945, sits atop a high hill on the island. This 170 foot high hill is located on the southwestern extreme of the island. [5]

The island has four beaches: Pelicano, Playa Larga, Carrucho and Coast Guard. The island also possesses a fauna and flora not found anywhere else in the world. [6] The island has no permanent residents, but the government of Puerto Rico maintains a Department of Natural Resources personnel and security personnel there. At 189In the year 9 there was a registered permanent population of 64 residents, but this has since dropped to zero. [7]

Cactus in the dry forest of the island

While there is no consensus on how the island got its name, one story given by Kurt Pitzer and Tara Stevens is that of a Portuguese pirate, José Almeida. [8] A former sailor merchant, Almeida fell in love with a Basque lady in Curaçao, married her in St. 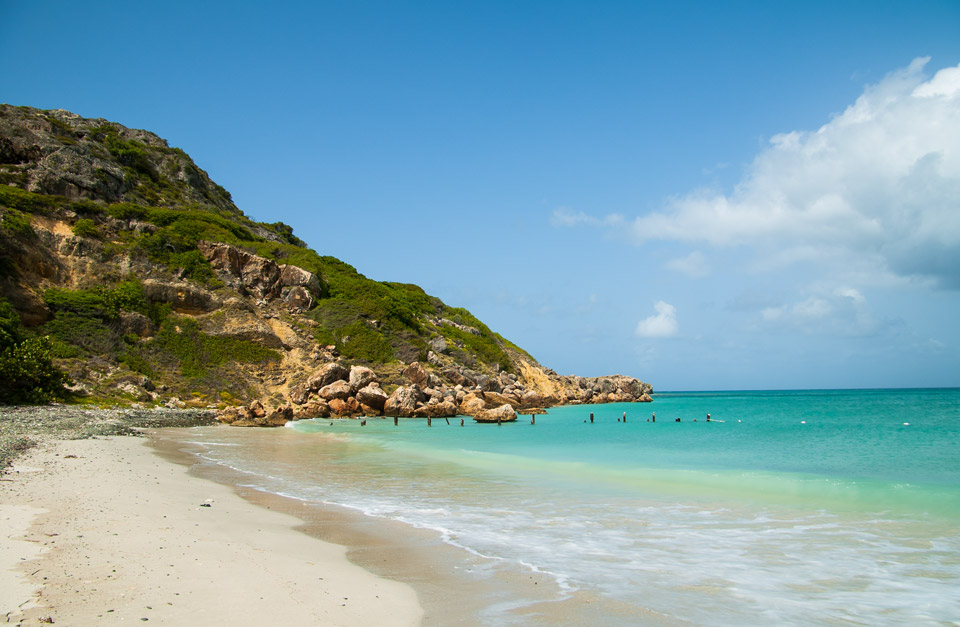 Thomas, US Virgin Islands and took her piracy with him around the Caribbean. On the first raid, however, she was killed by a stray bullet. Distraught, Almeida had her embalmed and placed in a glass box inside a copper coffin. He buried her in a cave on a deserted island near Ponce. [9] He will come every month to look at her preserved body and leave half of his treasure in her grave. Almeida, however, was caught on mainland Puerto Rico, tried hard, and executed at El Morro in 1832. Many years later, a Spanish engineer discovered a glass and copper coffin, and identifying the reef on a map gave it its current name. [10] The treasure found, if any, was kept secret. [8]

Another possibility is that the island got its name because it resembles someone lying down when viewed from the main island. Caja de Muertos can be translated into English as «coffin» or «dead man’s chest». 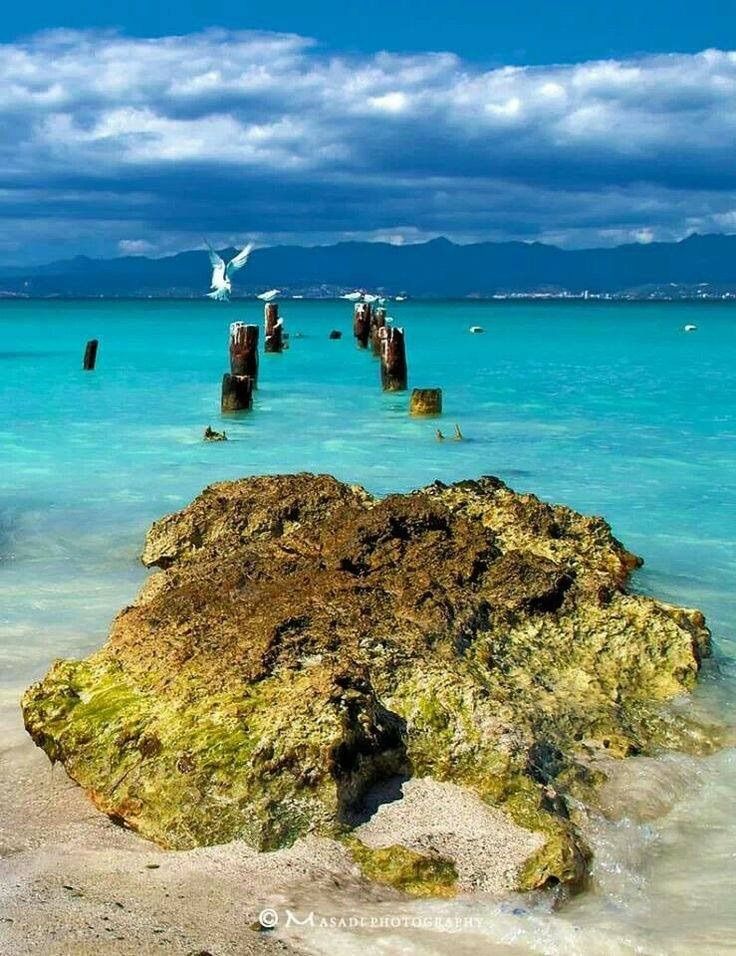 Van Buren of Yale University that the island’s name might be related to the sea shack «Dead Man’s Chest», first written by Robert Lewis Stevenson for his novel Treasure Island,[11] However, no scholar from Van Buren did this connection and there is no evidence to support such a claim. Additionally, Van Buren says that Stevenson did not write the song «Dead Man’s Chest» himself, that he «picked it up somewhere», which is another unsubstantiated claim (see «Dead Man’s Chest» for more information about the fakelore surrounding this song ) . [12]

The official version of the origin of the name, as given by the Puerto Rico Department of Natural Resources and under whose care the island is currently entrusted, is as follows: «His name is associated with the 18th century French writer Jean Baptiste Labat who called him Coffre A’morr (Caja de Muertos), referring to the fact that when the island is seen from certain places in southern Puerto Rico, it gives the impression of seeing a dead person lying on the plateau. 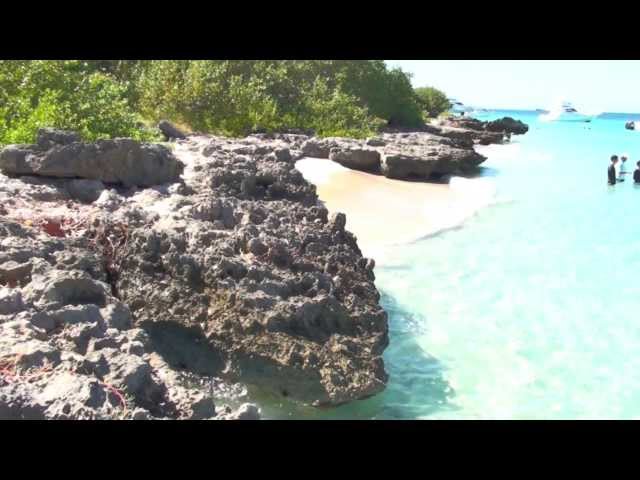 Playa Larga, above, is part of the protected area of ​​the island

The island was designated as a nature reserve in 1980 after a meeting was held in Puerto Rico by the Puerto Rico Planning Board where they considered a recommendation made by the Coastal Management Program to turn the island into a protected desert area. The island has remained in a protected area ever since. [15] Protection is mainly due to its heavy traffic turtle, which is an endangered species. Sorry, we couldn’t find the page you were looking for 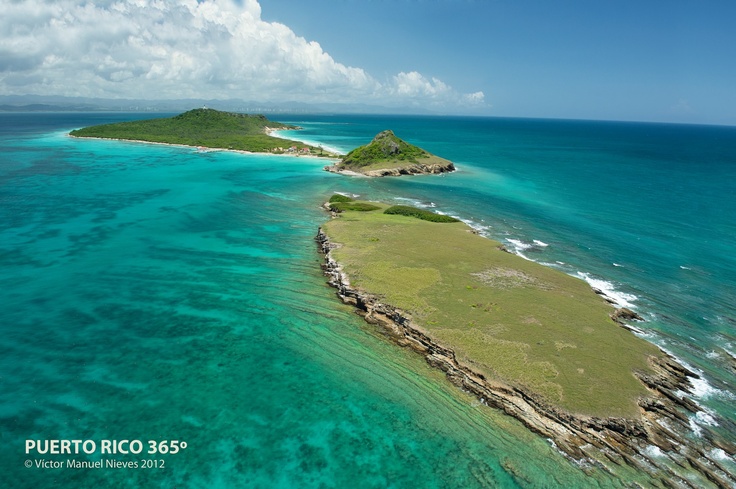