The most famous fortification in Puerto Rico is probably El Morro Castle, but Fort San Cristobal, located in Old San Juan is not far behind. A section of the fort is walking distance from the San Juan Capitol Building and the Teatro Tapia y Rivera, a famous and historic theater. San Cristobal, as it’s commonly called, offers spectacular views, impressive architecture and its own unique experience for visitors.

According to the National Park Service, Fort San Cristobal is thought to be the biggest fortress constructed on the American continent. The fortress served as a means of defence for the city of San Juan in the event of land attacks from the east. The structure was built over a period of 150 years, and features three levels and multiple outer defences. Chief engineer of the project was Irishman Tomás O’Daly with assistance from Juan Francisco Mestre. The fortress was named in honor of Saint Christopher, the patron saint of land travelers, and was considered a necessary addition to San Juan’s defences in the wake of devastating attacks from the English in 1598 and Dutch in 1625.

With its design inspired by the 17th century Vauban-style fortresses of France, notable features of the fort include a dungeon, moat, plaza, rooms for canons, various tunnels, and a bunker, with two observation posts added during World War II. In addition, rainwater was collected and those cisterns are used in the present day. The cisterns retain 800,000 gallons of water which is used to irrigate surrounding parkland and stands as proof that self sufficiency has existed for centuries.

Other must-know historical facts are that downsizing of the fort was carried out during late 1800s to make space for traffic flow into and out of Old San Juan, and San Cristobal was declared in 1983 part of the San Juan UNESCO World Heritage Site, along with other Spanish-era fortifications.

Fort San Cristobal’s network of underground tunnels is open for exploration – the complex maze was originally utilized to facilitate easy communication, transportation of military materials, and add a level of difficulty for attackers. The tunnels were completed in 1780 and were built to provide visual disadvantages for attackers through the shaping of the tunnels and the darkness of the surroundings. Visitors have the opportunity to walk through tunnels and gain additional insight into this important fortification. The structure stands as an imposing and impressive example of 18th century innovation in military engineering.

Since you are here, we would like to share our vision for the future of travel – and the direction Culture Trip is moving in.

Culture Trip launched in 2011 with a simple yet passionate mission: to inspire people to go beyond their boundaries and experience what makes a place, its people and its culture special and meaningful — and this is still in our DNA today. 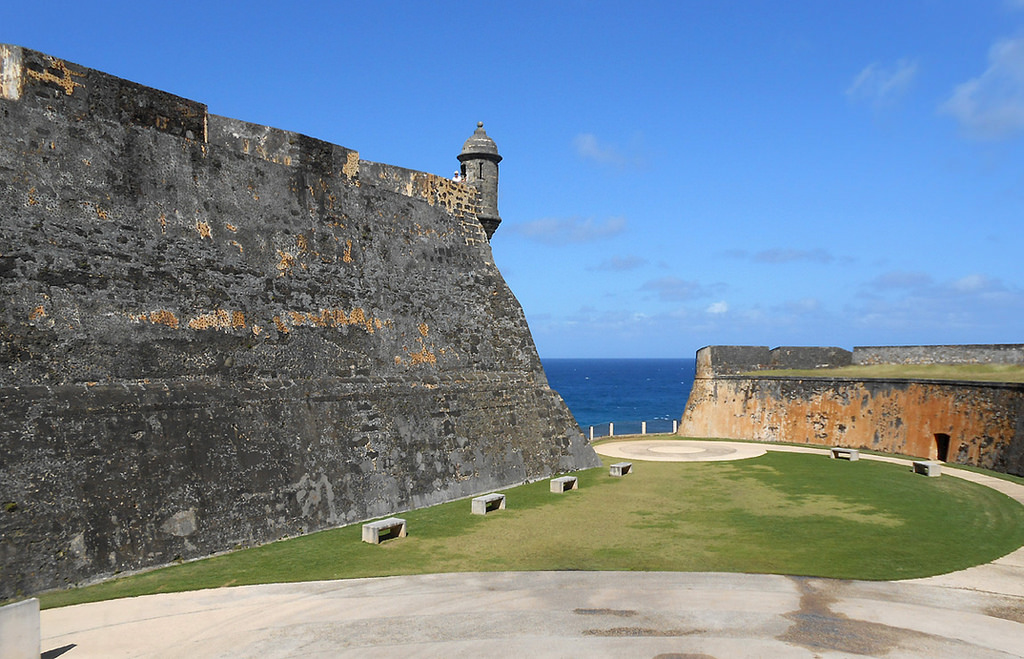 We are proud that, for more than a decade, millions like you have trusted our award-winning recommendations by people who deeply understand what makes certain places and communities so special.

Increasingly we believe the world needs more meaningful, real-life connections between curious travellers keen to explore the world in a more responsible way. That is why we have intensively curated a collection of premium small-group trips as an invitation to meet and connect with new, like-minded people for once-in-a-lifetime experiences in three categories: Epic Trips, Mini Trips and Sailing Trips. Our Trips are suitable for both solo travellers and friends who want to explore the world together.

Epic Trips are deeply immersive 8 to 16 days itineraries, that combine authentic local experiences, exciting activities and enough down time to really relax and soak it all in. Our Mini Trips are small and mighty — they squeeze all the excitement and authenticity of our longer Epic Trips into a manageable 3-5 day window. 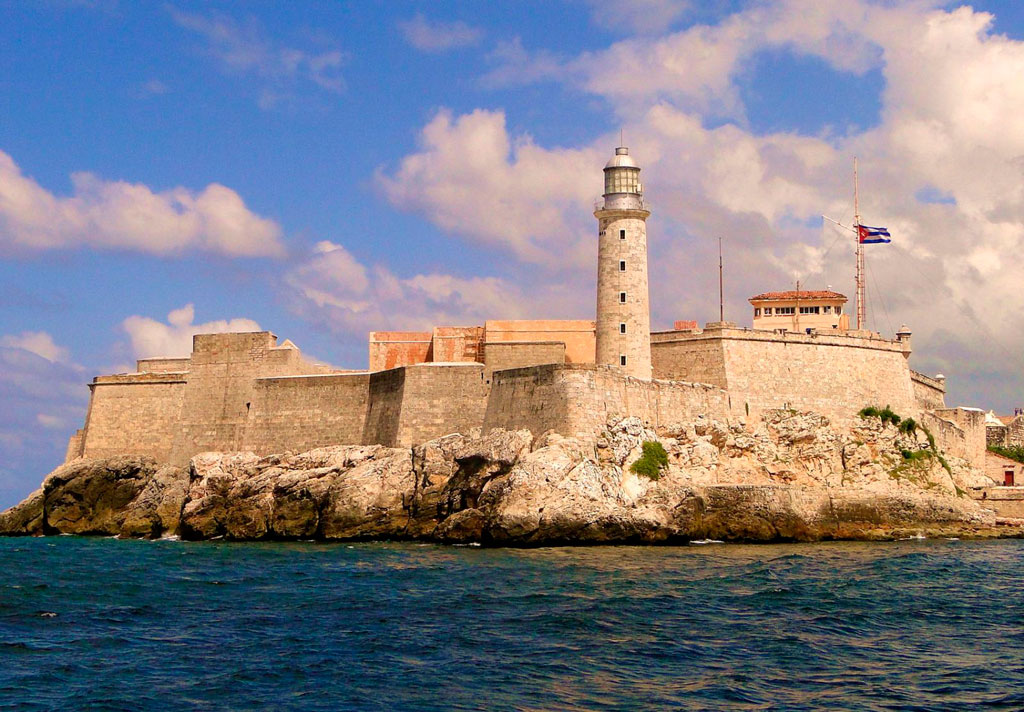 Our Sailing Trips invite you to spend a week experiencing the best of the sea and land in the Caribbean and the Mediterranean.

We know that many of you worry about the environmental impact of travel and are looking for ways of expanding horizons in ways that do minimal harm – and may even bring benefits. We are committed to go as far as possible in curating our trips with care for the planet. That is why all of our trips are flightless in destination, fully carbon offset — and we have ambitious plans to be net zero in the very near future.

This entry is saved as a draft, but has not been submitted for review.

The Castillo de San Cristobal also known as «Gibraltar of the Caribbean» was first built in 1634 by the Spanish settlers. This large fortress was built for the defense of San Juan to protect this city from attack by land from the east.The fort was named in honor of Saint Christopher. 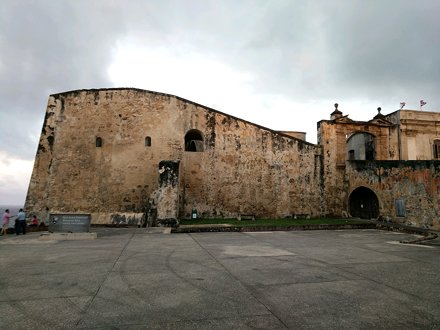 Several attacks were on this island that were from the English in 1598, Dutch in 1625, and British in 1797. After the attacks occurred, the government decided it was best to have the fort established. This fort is now a national historic site and park that was restored in 1983.

Overall look of the fort

One of the tunnels

One of the drawings in the fort

The construction began in 1625 and was completed in 1783. Many drawings are appeared on the thick walls that described the attacks that were in this fort. The fort had underground tunnels that were utilized for communication, transportation, military materials, and levels of difficulty for the attackers. The tunnels were completed in 1780 and provided the disadvantages from the attackers with the shaping of the tunnels and darkness. These tunnels were a lot easier for the troops to move to different places a lot faster. 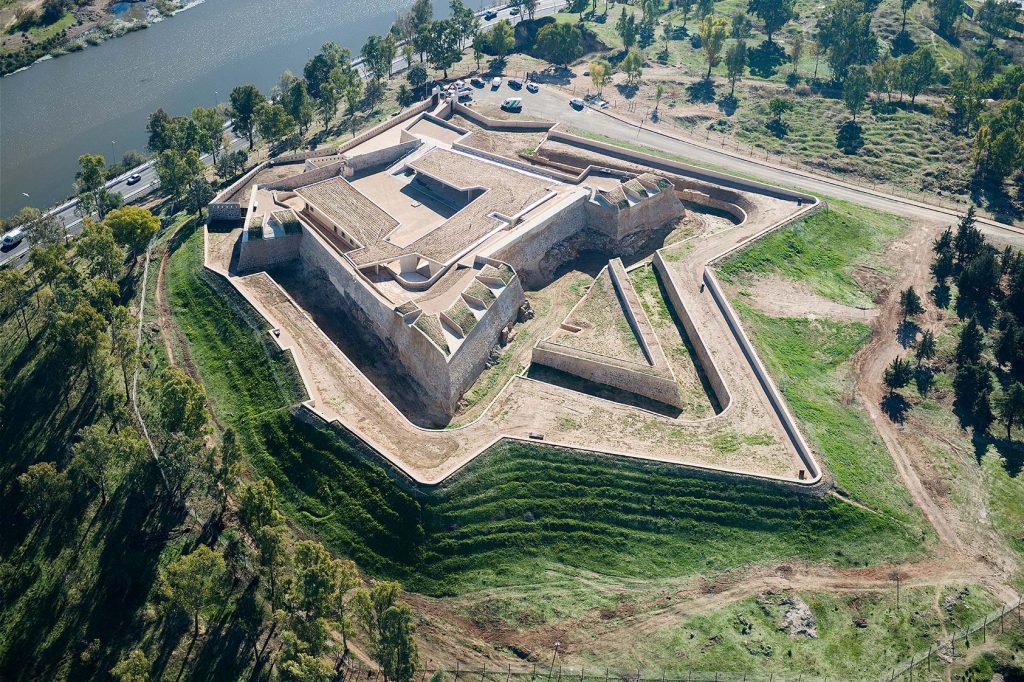 The attack from the English in 1598 was led by George Clifford, who wanted to clean England’s honor which ended up being dirty by Sir Francis Drake’s defeat. After this occurred, he then organized the English to go against Spain. The Spanish won the first battle, however the Spanish troops couldn’t hold up the English’s entry in the city. The attack from the Dutch in 1625 were trying to take the land side of San Juan. This attack was led by General Hendricksz Boudewijin; however, the Spanish troops forced him and his troops to leave the city but did not burn the town. This attack showed the community the defenses and improvements that built a wall that surrounded the village. In 1797, the British troops made their first attack which was the last attack on this fort. This attack was led by General Ralph Abercromby in April. He sent nearly 7,ooo troops and 64 warships. The Spanish made them retreat 13 days after this final battle.

Because of his voyage and success, the government named it in honor of Christopher Columbus. 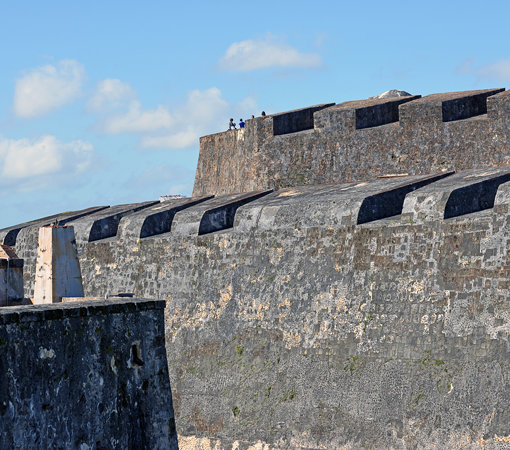 His high religion, aspirations with trading, competition, and colonialization left his mark on the island. Many admired his work and commitment on the island was special to them. The colony was called «rich port» and it became a way of the military outpost.

The fort was active up to 1961 and was served as a military base to the U.S. army. From there, it was restored in 1983 and was declared as a national park and museum. Many people visit this historical site to get a clue of how the attacks were and the history of it that it made in the city. The U.S. army used the fort’s artillery post often in WWII. This fort is also where the first shots were fired during the Spanish American War. 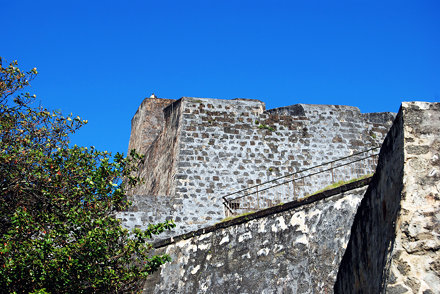 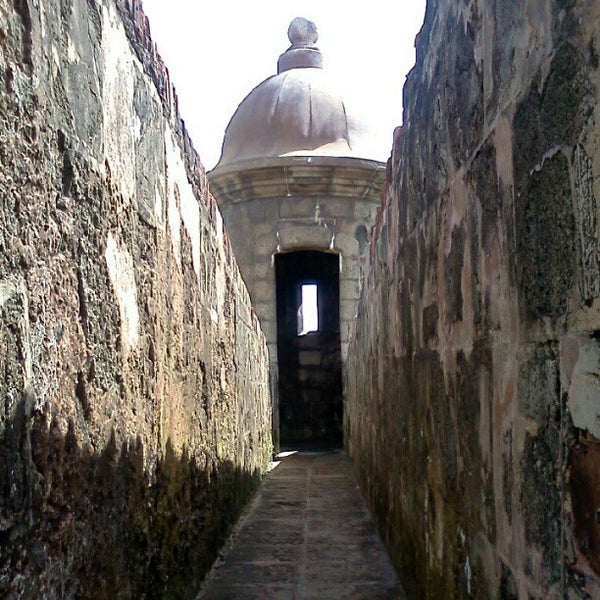 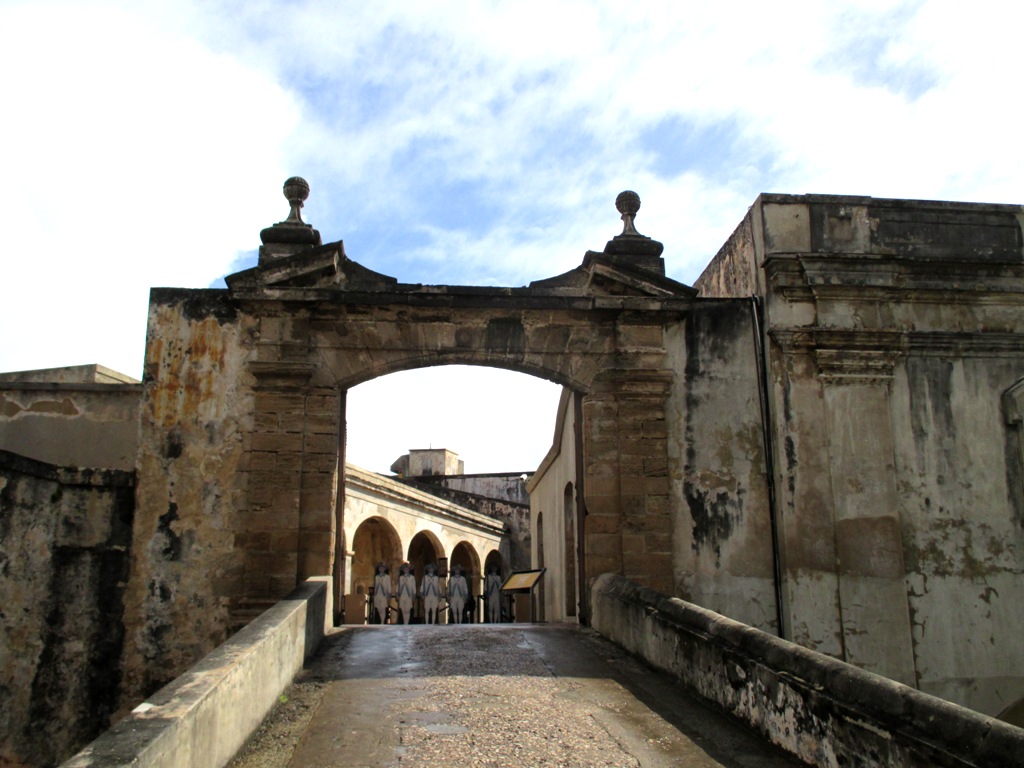 Anyone who visits Pamplona will see Mount San Cristobal. If you don’t see it on your way into or out of the city, you will see it from within the city walls or from La Taconera Park. It is a small mountain that is easy to climb and is synonymous with Pamplona for the locals. In summer, its bright green slopes are illuminated by the sun, often against clear blue skies. In winter it turns white, covered in icy frost in the morning or thick snow covering the grass, trees and tiny villages. But San Cristobal also has a dark and bloody history, being home to perhaps the scariest abandoned building I’ve ever come across.

«Don’t call it San Cristobal. It’s called Ezcaba. That’s what Oski told me. Oski was one of the first locals, whom I met in Pamplona, ​​a faithful Basque who once witnessed being run into an ATM machine because it would not offer him Basque despite being fluent in Spanish and English. 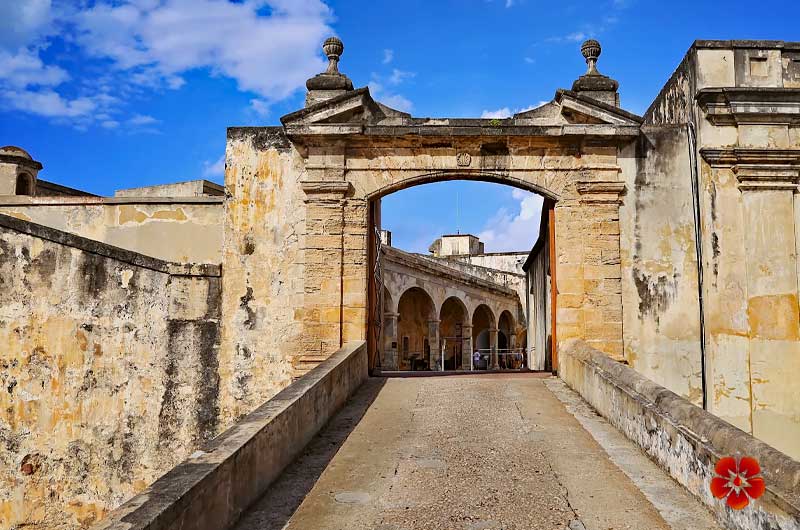 village called Artika and was the first person to tell me the dark story of this mountain.0005 © Adam L. Maloney (Christian crosses on the lower part of the mountain)

Only two years later I finally climbed the mountain with my friend. There is a road that can be easily walked on, but we avoided it by choosing one of the steep and dense footpaths, passing through rocks, thorns, plants and steep hills covered with trees. I remember stopping to rest halfway up the mountain to see a yellow spider crawling up my arm, as well as a black and yellow lizard, possibly a fire salamander, lying on a rock next to me.

© quintanilla (View of Pamplona from the top of the mountain)

We reached the top of the mountain in about two hours and saw magnificent views of Pamplona and its surroundings, but above all, the fort is in my head. Fort San Cristobal was built between 1879-1919 during the Carlist Wars but was turned into a prison in the 1930s. When the Spanish Civil War broke out in 1936 as a result of a fascist military uprising, Pamplona instantly came under fascist control and 2,000 people were imprisoned in the fort, mostly for having unfavorable views. On 22 May 1938 there was a huge prison break and 792 prisoners managed to escape. Descending down the mountain, the prison guard alerted the fascist rebels, who immediately began hunting, arresting 585 who had fled, and 211 were shot dead on the spot. 14 of them were considered leaders of criminal gangs and were sentenced to death. Only 3 fugitives successfully escaped and crossed the French border. Many of those who were returned to prison were left there to die of hunger and disease in their cells, and the death toll for this exceeded 400 people.

© Jorab (Inside the prison’s corridors in sight of former cells)

It was a strange feeling to climb into an abandoned fortress, walk through its concrete corridors and even into dark and empty cells, a reminder of a time that should never be repeated.

«If I condensed what I know and thought about the Spanish Civil War into six lines, you wouldn’t print it. 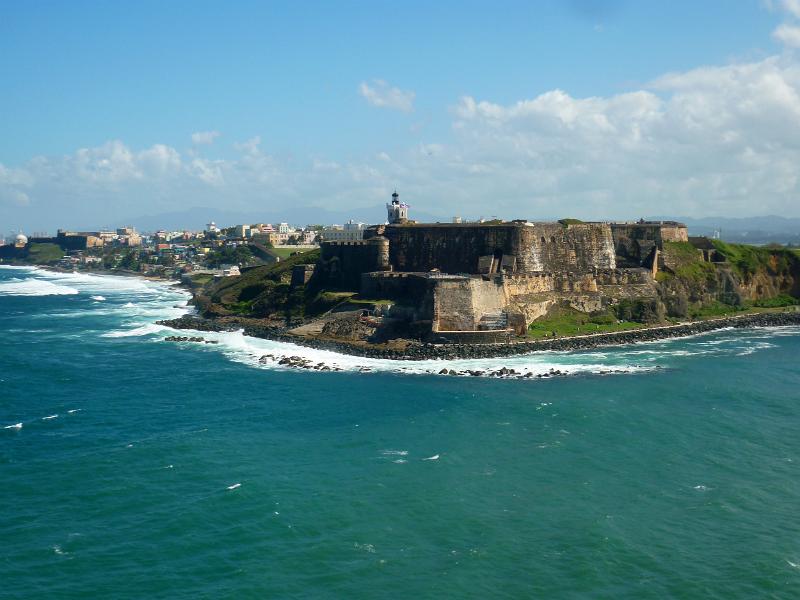