The National Weather Service is an agency under the National Oceanic and Atmospheric Administration, which is a part of the Department of Commerce. The mission of the National Weather Service is to provide weather forecasts and hazardous weather warnings to the public. We maintain a constant eye on the weather across the country 24 hours a day, 7 days a week, 365 days a year. A staff of over 4,500 skilled employees accomplishes this mission with the assistance of high-speed computer networks, an orbiting fleet of weather satellites in space, and ground-based radar systems.

The San Juan forecast office is staffed 24 hours a day with at least one meteorologist and one hydro-meteorological technician. This office provides forecasts for users across Puerto Rico and the U.S. Virgin Islands. One of the major duties in this office is the coordination with the National Hurricane Center and dissemination of products, statements, watches, and warnings during the Hurricane Season. Several times each day, forecasts are prepared in both English and Spanish for use by the general public, broadcast media, and the aviation industry.

The history of this NWS office dates back to the past century. Currently, our office is located in Carolina, Puerto Rico next to the San Juan/Luis Munoz Marin International Airport. Carolina is located on the Northern coast of Puerto Rico in the Caribbean. The U.S. Virgin Islands are Saint Croix, Saint Thomas, and Saint John, which are located about 50 miles east of Puerto Rico. 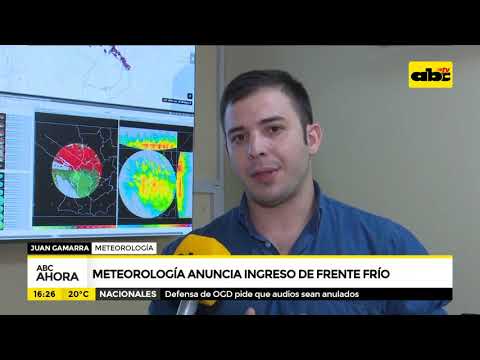 Starting in 2013, our office will issue approximately every 6 months a newsletter filled with interesting articles written by our staff!

Check the latest one here: The Whispering Trades

Our forecast area of responsibility includes all of Puerto Rico, Vieques, Culebra, and the United States Virgin Islands (Saint Croix, Saint Thomas, Saint John, and adjacent islands) divided in 15 zones and the coastal waters surrounding this area out to 20 nautical miles divided into 10 zones.

The history of the National Weather Service in the Caribbean dates back to the 18th century, when it became evident that hurricanes, which affected the Continental United States, had their origin in the Caribbean and the Tropical Atlantic. 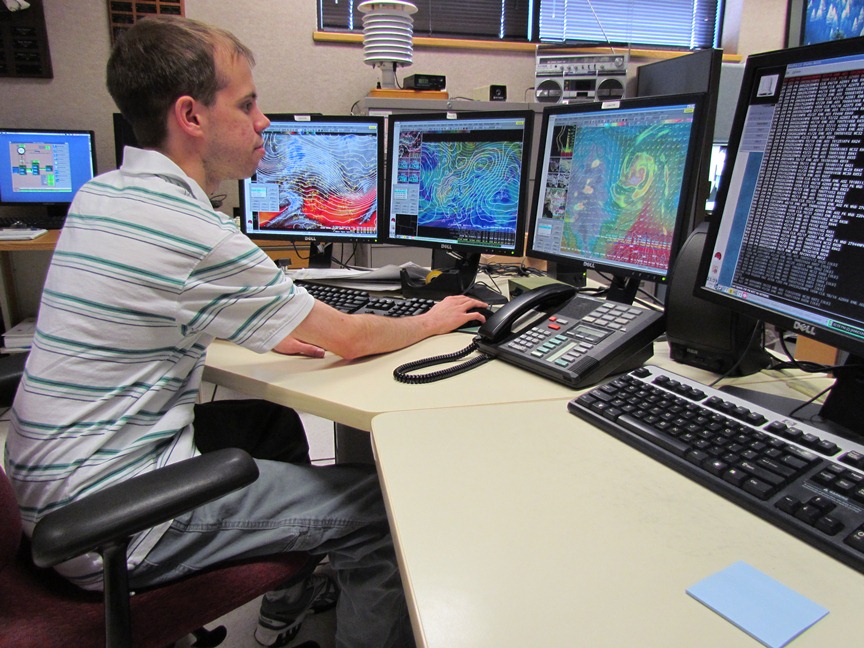 Back in the 1870s, the U.S. Government supported the collection and processing of meteorological data across the Caribbean Islands. The collection of this data across the Caribbean led to the first study of the San Felipe Hurricane of September 13, 1876. The U.S. Weather Bureau then published and disseminated this study throughout the United States, which led to an understanding the hurricane vortex and its behavior. In May 1899, the U.S. Weather Bureau established its Weather Office in Puerto Rico immediately upon taking command of the island. That same year, a network of rain gauges was placed around the island, and the collection and dissemination of daily weather observations began.

Initially, in 1899, the Weather Bureau Office was established in Old San Juan, in a building next to the Fortaleza. The local Department of Public Works administered the meteorological observations. In 1913, the Weather Office was relocated to Puerta de Tierra in Old San Juan. Unfortunately, this building was destroyed by the San Felipe II Hurricane of September 13, 1928. 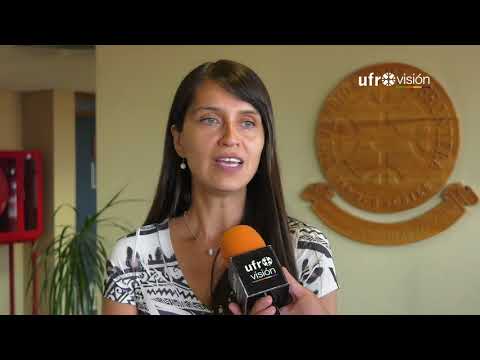 It was rebuilt with concrete blocks and used by the U.S. Weather Bureau, then under the U.S. Department of Agriculture, until 1946, when the Office was relocated to the Isla Grande Airport. The original building, now a historical site, is still in place in Puerta de Tierra and forms part of the Old San Juan historical structures protected by law. It is being used as a museum by Puerto Rico’s National Guard. The building has the emblem of the Department of Commerce with the Weather Bureau name placed on it.

As the importance of commercial aviation grew and the demand for aviation weather services increased, the San Juan Weather Office was relocated again in 1954, but this time to the new San Juan International Airport at Isla Verde (Carolina), where it remained in the main building until 1994.

In 1970, the National Oceanic and Atmospheric Administration (NOAA) was created under the U.S. Department of Commerce. The U.S. Weather Bureau was administratively placed under it and renamed the National Weather Service. 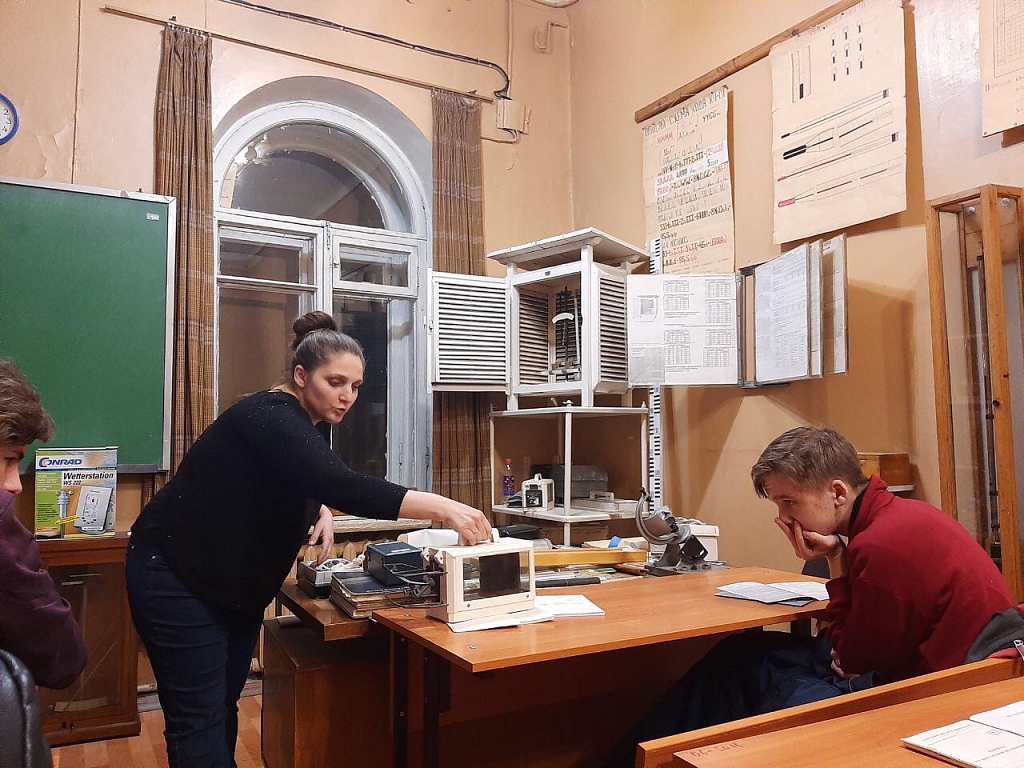 In the 1990s, Congress enacted the Modernization and Restructuring of the National Weather Service Act. The Act provided funding for facilities, new technology, and training. As a result, a new “Hurricane proof” building was constructed within the San Juan International Airport (now Luis Muñoz Marin International Airport) premises, which houses the new San Juan Weather Forecast Office of the National Weather Service. The relocation to the new building was completed in April 1994.

The role of the U.S. Weather Bureau in Puerto Rico in the first half of this past century was mainly focused on hurricanes and the collection and dissemination of climatological data. The San Juan Weather Office also served as the Hurricane Forecast Center for the Caribbean from Hispaniola eastward until the 1970s, when the National Hurricane Center was established in Miami, FL.

In the late 1930s, with the advent of commercial radio, routine daily weather transmissions from the U. 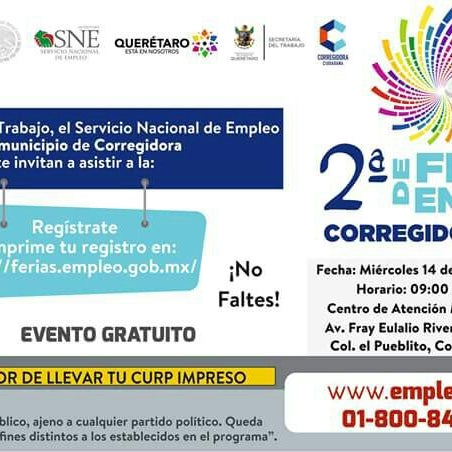 S. Weather Bureau were initiated via WKAQ, the first radio station established in Puerto Rico. It is worth noting that during Hurricane San Felipe II on September 13, 1928, the Weather Office used the radio to transmit a Hurricane Warning for the first time. In the late 1960s through the 1980s, the Weather Office used to provide daily live broadcasts over the government-owned WIPR Radio Station.

In the 1970s, the National Weather Service established its own Weather Broadcast Network called the NOAA Weather Radio.

The Weather Forecast Office in San Juan, Puerto Rico has transitioned into a modernized facility. Some of the most significant modernization projects that the Office has completed through the years have included the following:

Additionally, it is the only WFO in the National Weather Service that continuously provides bilingual English and Spanish services.

The National Weather Service (NWS) provides weather, hydrologic, and climate forecasts and warnings for the United States, its territories, adjacent waters, and ocean areas to protect life and property and enhance the national economy. Due to the complexities of the weather experienced across the U.S., the NWS operates the most advanced weather service in the world.

Special thanks to Dr. José Colón, former Meteorologist in Charge of the Office from 1963 to 1986, for his assistance with this historical information.