Food and culture converge in Puerto Rico at legendary la Ruta del Lechón. Located along Road 184 in the mountain town of Cayey, the “Pork Highway” has earned cult status among locals and travelers alike. As the name implies, la Ruta del Lechón is known for its abundance of lechoneras, which are rustic, open-air roadside restaurants that specialize in slow-roasting whole pigs over hot charcoal. The Taínos, who are the original Indigenous people of the Caribbean, called this type of low and slow cooking barbacoa, which is where the word barbecue comes from.

The pigs along the Pork Highway are slow-roasted over hot coals for up to eight hours. Lyma Rodriguez for Atlas Obscura

La Ruta del Lechón is part of a Puerto Rican tradition called chinchorreo, where friends and family members come together and go restaurant hopping. The term chinchorreo comes from chinchorro, a local word for a kiosk or small shack serving food or drinks.

The highway is lined with colorful outdoor installations. Lyma Rodriguez for Atlas Obscura

With its rich mix of African, Spanish, and Indigenous Taíno roots, Puerto Rico has a long history of merging diverse culinary traditions to create new flavors. From plantains brought to the Island by enslaved Africans, to yuca cultivated by the Taíno, to rice brought by the Spaniards, Puerto Rican food has evolved throughout the centuries, and it continues to do so with young creative chefs in lechoneras along the Pork Highway.

A crispy bit of pork skin is often placed atop each succulent portion of pork. Lyma Rodriguez for Atlas Obscura

The art of pig roasting is taken so seriously in Puerto Rico that lechón asado was declared an official part of the Island’s gastronomic heritage. Cooking lechón is a ritual; the pig roasts for over eight hours before being skillfully carved behind the counters with machetes. Every lechonera has a unique recipe, but one constant is the adobo; a seasoning containing salt, pepper, oregano, garlic, annatto, and sometimes ajíes dulces—a mild sweet pepper which is a staple in Puerto Rican cuisine (it’s one of the star ingredients in sofrito, a sauce considered the most important culinary component of the Island). The inner-workings of a classic lechonera. Lyma Rodriguez for Atlas Obscura

Preparing the lechones is not an easy feat. “An average day starts at 3 a.m., roasting 10 pigs that weigh about 150 pounds each,” says Nashalee Rodríguez, an employee of Lechonera Los Amigos. This staple lechonera, located at the start of la Ruta del Lechón, offers side dishes, like rice with pigeon peas (arroz con gandules), boiled root vegetables like yuca and taro root (viandas), and pasteles. Pasteles, made from mashed green plantains with pork filling wrapped in banana leaves and boiled, are a classic Puerto Rican dish.

Farther north on la Ruta del Lechón, you can find Los Pinos, a lechonera that Anthony Bourdain touted as serving the best roast pork he’d ever had. 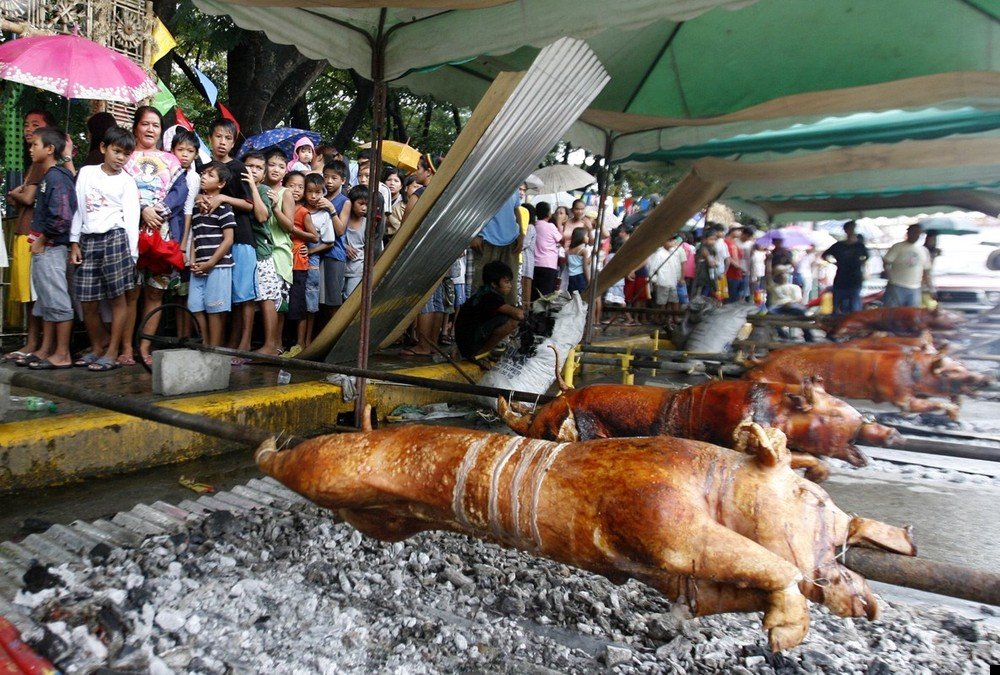 Locals flock to Los Pinos in the early morning hours, arriving before noon to sample fresh-from-the-pit lechón. Los Pinos is also known for its delicious rice with guinea fowl, rennet, and liver stew. “I come here at least once a week just for the rice with guinea,” says Carlos Rivera, a local visitor.

Although the roasted pig takes center stage, there are options for those who don’t consume pork. “We have vegan options, and we often modify our dishes to satisfy customers,” says Erica Rodríguez Figueroa, Manager of Los Pinos.

Mofongo is a dish with West African roots traditionally served as a side dish in many lechoneras. Lyma Rodriguez for Atlas Obscura

Another traditional dish found in Guavate is mofongo, made by mashing fried green plantains in a pilón, or mortar and pestle, along with garlic, olive oil, and chicharrón, fried pork skin. Mofongo comes from the Angolan technique of mashing large amounts of starchy foods, then adding liquid and fat to soften the mixture. 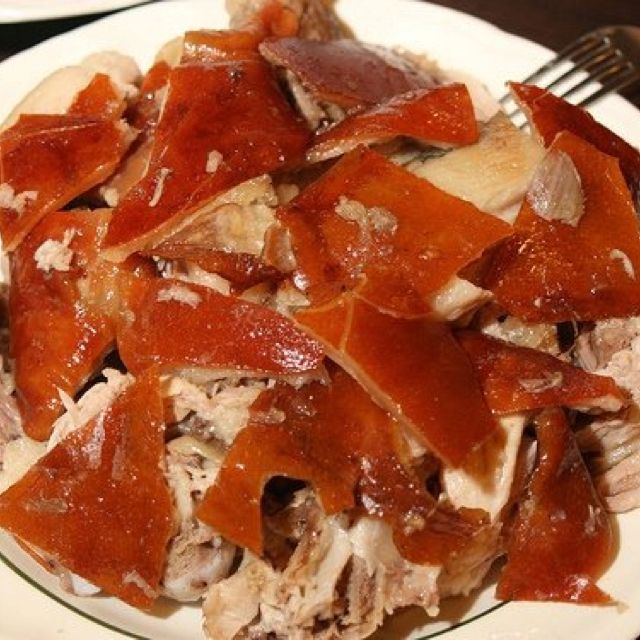 According to Puerto Rican historian Cruz Miguel Ortíz Cuadra, enslaved Angolans and other West Africans brought this practice to Puerto Rico in the 1500s. The dish traces its roots to the West African fufu, a mash of boiled yams. La Placita de Guavate is known for its authentic mofongo.

Part of the celebratory experience of restaurant hopping on la Ruta is pairing your lechón with ice-cold Medalla, a locally produced, award-winning beer. Many lechoneras also serve mojitos featuring local fruits like passion fruit, soursop, and guava, as well as the Island’s signature piña colada. As the birthplace of the piña colada, Puerto Rico— which produces 70 percent of rum sold worldwide—is considered the rum capital of the world. The rum manufacturing process is deeply rooted in this Caribbean Island’s history, dating back to the 15th century, when sugarcane workers discovered the fermentation of mixed molasses and water.

Birthplace of the piña colada. Lyma Rodriguez for Atlas Obscura

There are also plenty of non-alcoholic options to be enjoyed, including fresh juices made of local fruits like tamarind, passion fruit, or acerola, a tart cherry-like fruit popular throughout the Island. 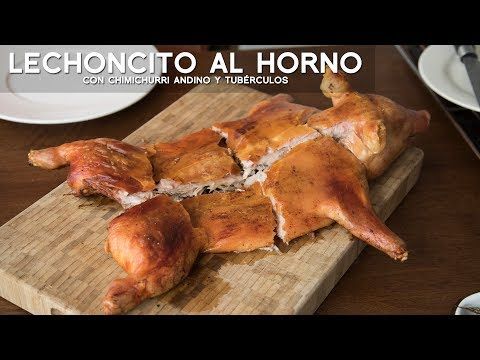 After a long day of feasting, a classic Puerto Rican cafecito, or coffee, is essential for catching a second wind.

Puerto Rico has a coffee culture that dates back more than 100 years. Harvested in volcanic soil, Puerto Rican coffee is world-renowned for its deep, rich flavor. Cafe Prieto’s coffee is particularly unique because of their exclusive use of Grano 20 beans, an intense flavor coffee bean that grows in the Hacienda Monte Alto in Adjuntas. Gorgeous coffee farms and haciendas are scattered across the Island and often provide family-friendly tours for coffee enthusiasts.

La Ruta del Lechón is also a place to explore the work of local artisans. As you enter Guavate, you will see a stone sculpture of three wise men sitting 33 feet high up on a hill. It’s on this hill you’ll find Monte Sagrado de los Tres Santos Reyes, the gallery and workshop of Juan Santos Torres, known as the “Picapiedras” (Flintstone) of Guavate. 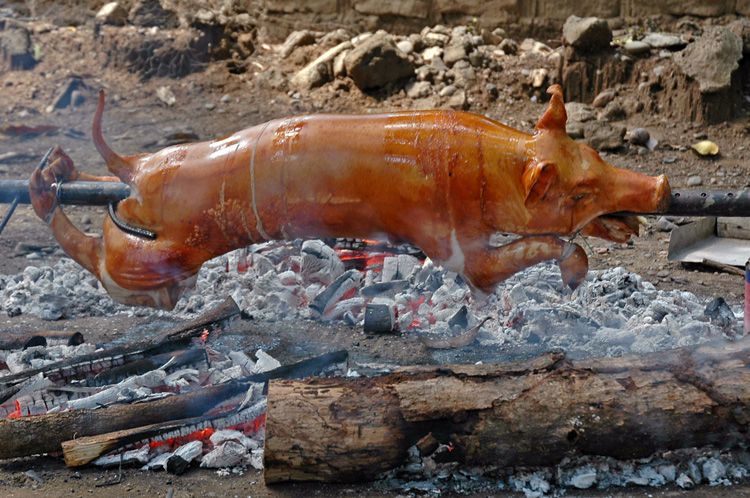 This sculptor has devoted himself to carving the three wise men that reflect the Puerto Rican family pillars of faith, culture, and tradition.

Another central component of chinchorreo is music: salsa, merengue, and reggaeton that fill the streets of Guavate, and play live at the lechoneras on weekends. Notably, El Rancho Original, a massive two-building lechonera, boasts a stage for live bands and a huge dance floor.

For foodies visiting Puerto Rico, experiencing la Ruta del Lechón—ideally while enjoying barbacoa and swaying to salsa—is a must. It’s an opportunity to experience and celebrate the Island’s history, cultural heritage, and spirit of community, one delicious stop at a time. Join us for a daily celebration of the world’s most wondrous, unexpected, even strange places.

No trip to Puerto Rico is complete without enjoying a heaped plate of juicy, tender, crispy-skinned lechón—the famous spit-roasted pig that is the island’s most iconic dish. In fact, lechón is so important to Puerto Rico that you’ll find an entire highway dedicated to it, named (what else) La Ruta del Lechón—the Pork Highway. Here, we’re giving you the best spots to eat lechón on the highway and elsewhere on the island. Buen provecho!

As its name suggests, El Rancho is the island’s OG lechónera and the first one to open on La Ruta. On any given day—but especially on weekends—El Rancho is packed with locals and visitors dancing salsa, drinking piña coladas and feasting merrily around casual picnic-style tables. (Pro tip: skip the noisy indoor seating and make a beeline for the tranquil dining gazebo out back, by the stream). No matter where you park yourself, the lechón will knock you out—melt-in-your-mouth meat and skin as crisp and crunchy as a potato chip, with a perfect layer of fat. The lechón here is so good, in fact, that it was featured by both Anthony Bourdain in No Reservations and Andrew Zimmern in Bizarre Foods. Not to be missed.
www.elranchooriginalpr.com

A little further north on La Ruta, Los Pinos is a local favorite that’s a little less rowdy than El Rancho, but equally authentic and delicious. Come before noon and you can watch fresh-from-the-spit lechón being expertly taken apart with a machete, moments before it’s heaped piping hot onto your plate—you can even request your favorite part. Los Pinos is also known for its delicious sides like morcilla (blood sausage), arroz con guandules (rice with pigeon peas) and fried-to-perfection plantains. Wash it all down with an ice-cold Medalla (the best-selling beer on the island), then find someplace nice and leafy to nap.
www.lechoneralospinoscayey.mybistro.online

Los Pinos is a 45 minute drive from Old San Juan, but you don’t need to drive that far to sink your teeth into some perfectly cooked lechón. Angelito’s is conveniently located in Trujillo Alto, a shorter 20-minute drive. Don’t let its cheesy cafeteria vibes fool you—this lechón is as legit as it gets. Angelito’s sources its pigs from Ceiba in northeast Puerto Rico, rubs them down with the freshest local ingredients and slow roasts them over charcoal—never gas!—to ensure maximum taste. The result? Exquisitely tender meat and skin so salty and smoky it will haunt your dreams. Make sure to save room for the pasteles: tamales made with green plantains and wrapped in banana leaves for a subtly sweet, nutty flavor.
www.lechoneraspr.com/trujillo-alto/angelitos-place. Yes, the lechón at La Estación is made by a «gringo» (CIA-trained New York chef Kevin Roth), roasted in an old car fashioned into a spit, and served in an industrial-chic space you could envision hipsters eating overpriced avocado toast in. But one bite of the outrageously succulent lechon renders all that meaningless. The meat is juicy, yes, but the skin is something else entirely: roasted on mango wood charcoal, it has a smoky sweetness and shatters delightfully when bitten into. Sadly, the lechón is not always on the menu—they currently only serve it on holidays, special occasions and during private events—so it’s best to call ahead. In any case, there are tons of tasty alternatives, from the smoked pork belly to the pulled pork-stuffed plantains (which, dare we say, are as delicious as the lechón itself).
www.laestacionpr.com

The sides are especially generous at Los Amigos, which is a good thing because they may be just as good as the lechón itself, especially the tangy, smoky-spicy morcilla (if you haven’t ever had blood sausage, this is the place to try it) and the soul-satisfying mofongo (essentially, fried plantains mashed with salt, garlic and little bits of chicharrón). 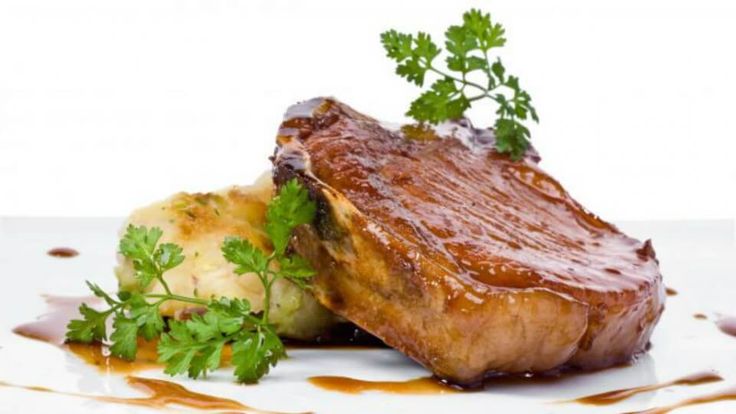 Added bonus: there’s a great little coffee shop next door, so you can drop in for a convenient (and necessary) pick-me-up before the drive home.
www.lechoneralosamigos.com

Full cast and crew of the film

There are no discussions for «Ese olor a lechón» yet. but you can create your own topic on forum

What it is connected with

You can choose in which language to read our site — Ukrainian or Russian. 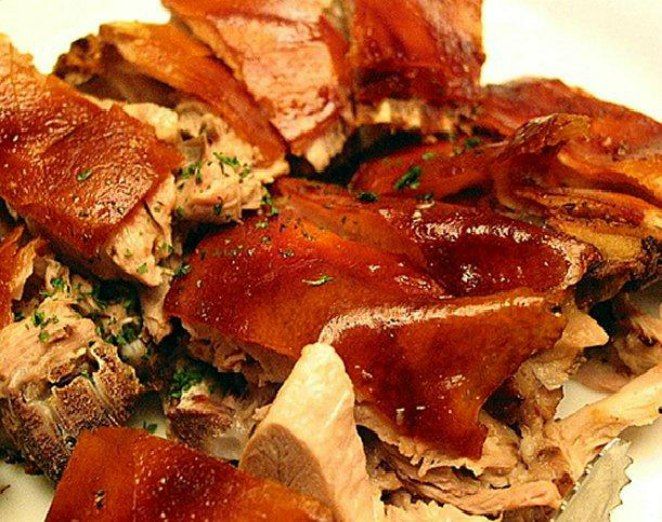